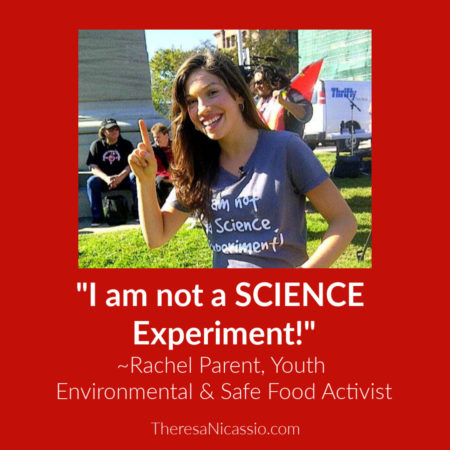 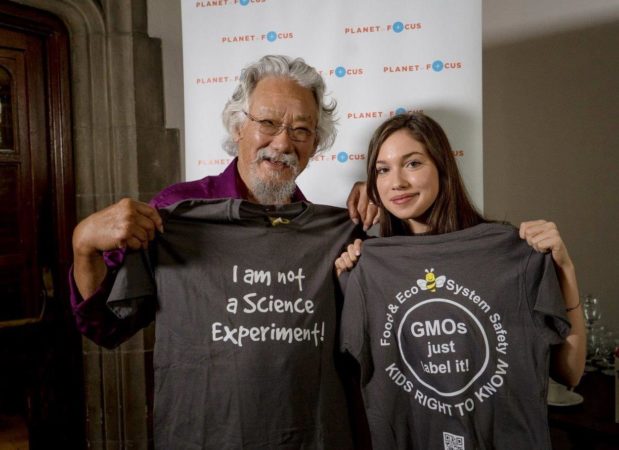 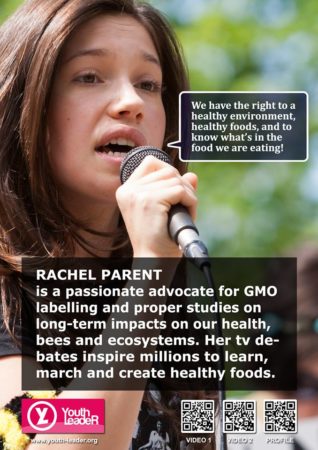 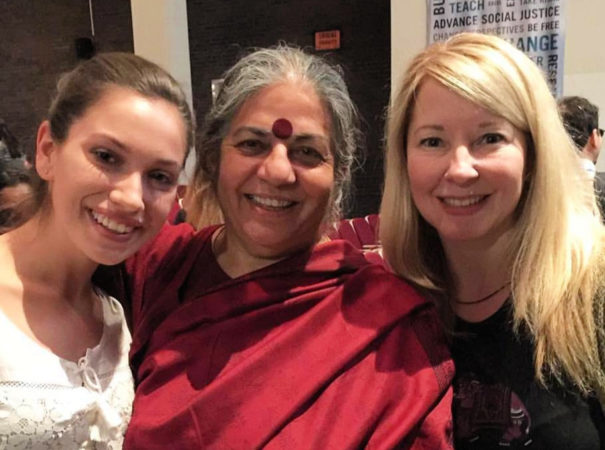 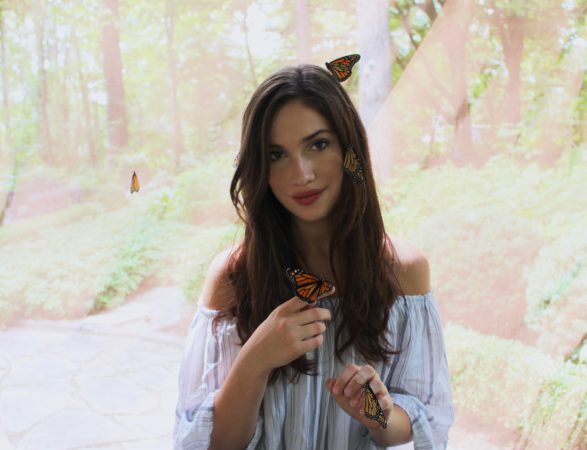 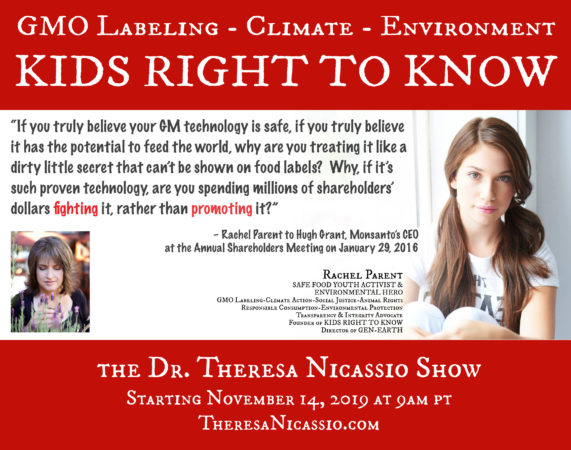 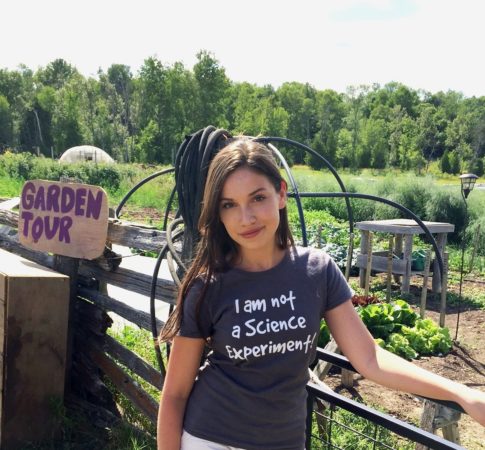 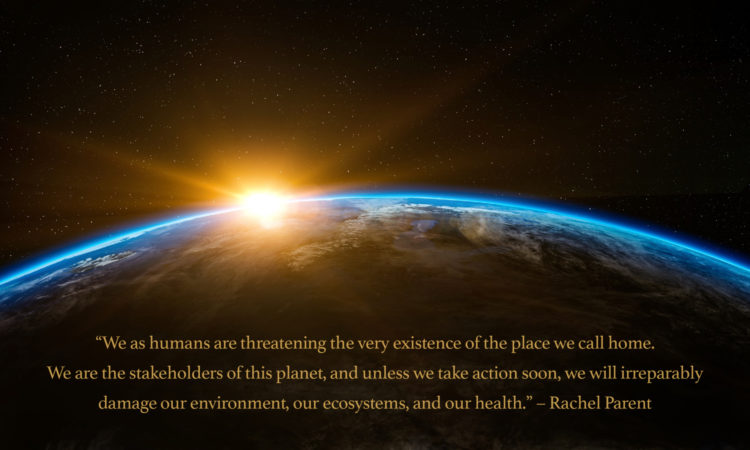 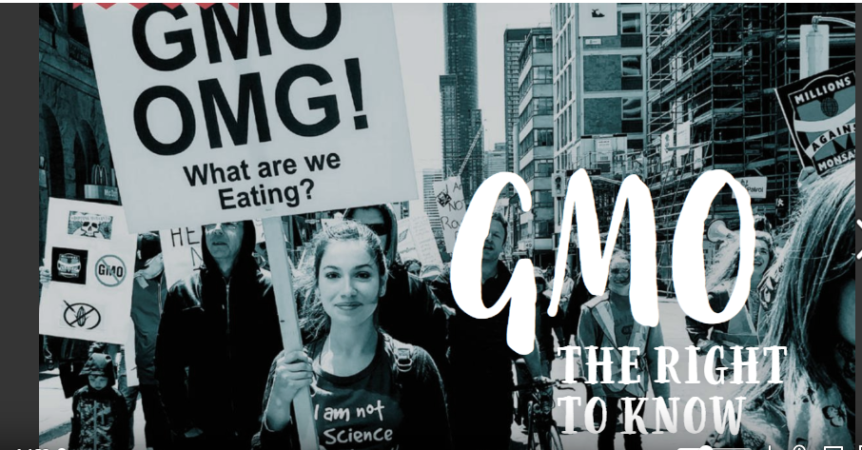 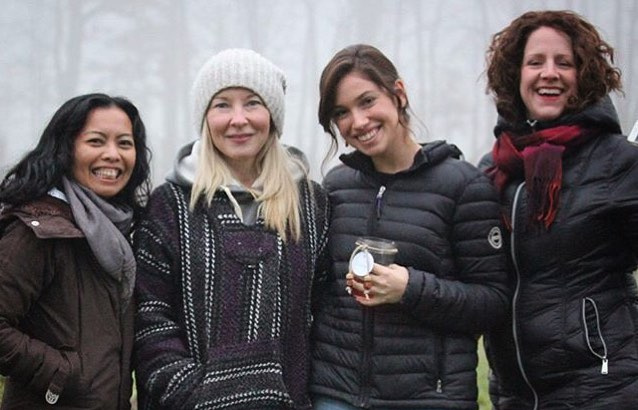 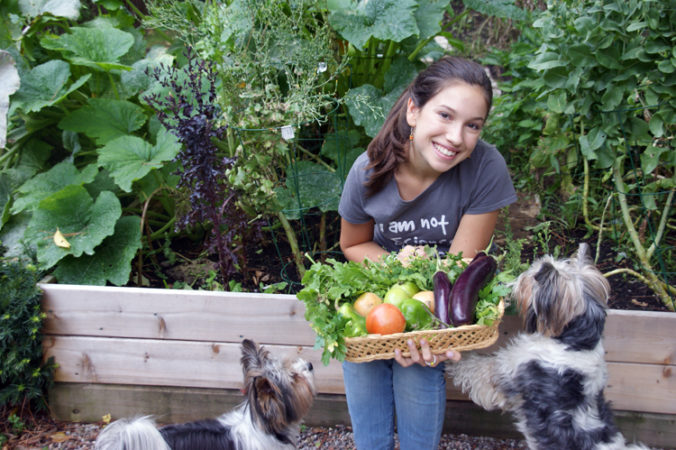 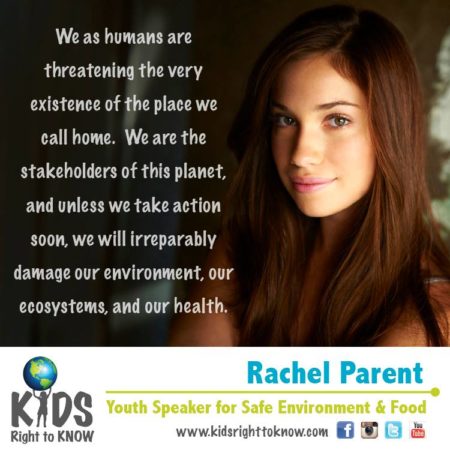 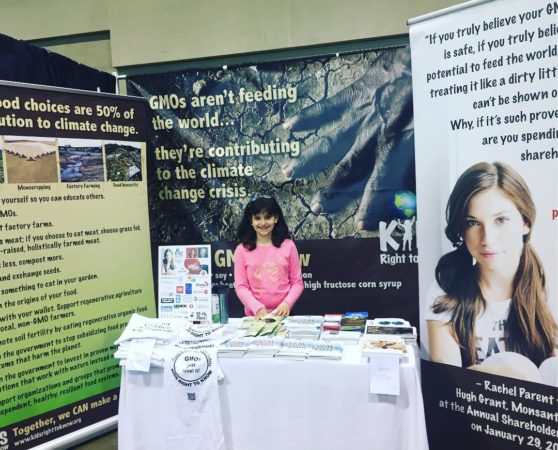 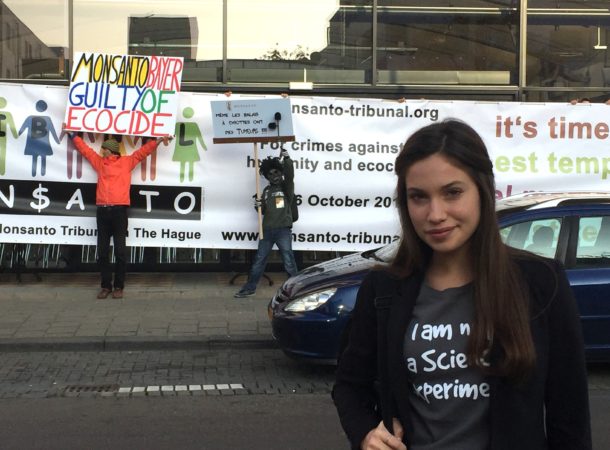 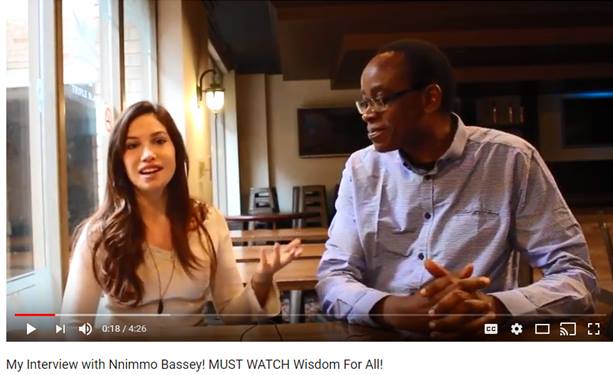 Rachel Parent is a relentless safe food environmental youth activist. Most known for her GMO Labeling advocacy, Rachel’s vision is actually much greater. She has a passionate and strong commitment to help motivate our youth, our communities, and policy makers to take simple actions every day for the protection of our ecosystems, the environment, and everyone’s future.

Since surprising the world with her courage and clarity as the 14-year-old powerhouse who successfully challenged celebrity host Kevin O’Leary on CBC Television in a debate about GMO labeling, Rachel Parent’s service as a youth activist now more broadly includes food and climate, social justice, animal rights, responsible consumption, and environmental protection.

In 2012, Rachel founded Kids Right to Know, a not-for-profit organization dedicated to educating youth, about the connection between food production and climate change, with a focus and transparency in the labeling of Genetically Modified Food (GMO Labeling) in Canada and the USA.

Founded on the belief that we all have the “Right to Know” what’s in our food, regardless of age, Kids Right to Know seeks to inform, educate, empower, and motivate kids to stand up and make a difference. 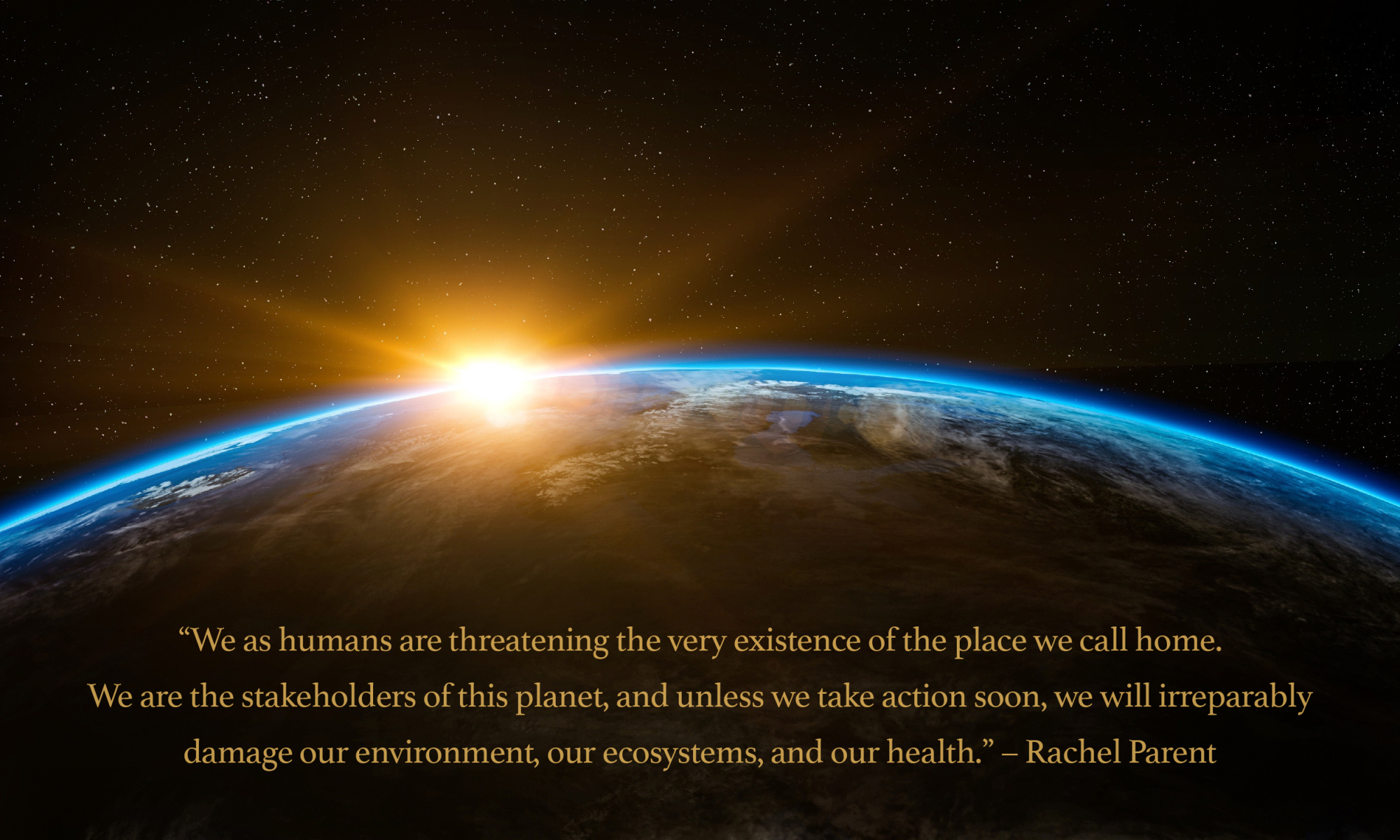 Passionate about environmental challenges & the current social and political dimensions associated with them, Parent also spearheaded and is the Director of Gen-Earth Events. Gen-Earth is an environmental platform dedicated to education through film and activism, with the goal of motivating youth to learn about organic regenerative climate solutions to help feed the world, cool our planet, and heal the environment.

During the summer months, Rachel has been dedicating some of her time working on building a Monarch Butterfly Conservation Program.

“Always leave the Earth better than you found it.” 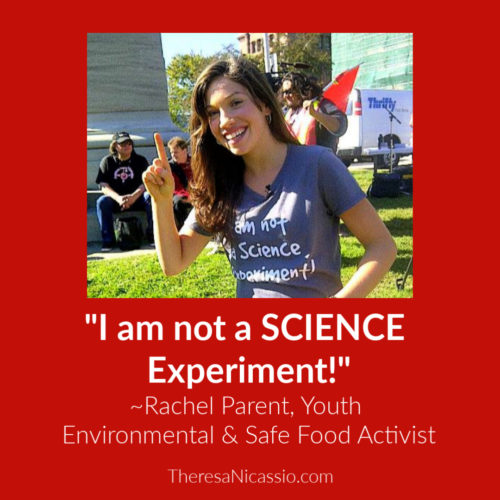 Since the age of 11, Rachel has devoted her energies for environmental and food safety activism. She has given dozens of television, radio, magazine and online interviews, including the well-publicized debate about GMO labeling with celebrity host Kevin O’Leary on CBC Television. She was also featured in a television series about GMO labeling that was aired on Global News National, the result of which awarded Rachel a meeting with the Honourable Rona Ambrose, Canada’s Minister of Health.

In addition to everything else she has done, Rachel has given two TEDx talks presentations and countless speeches to audiences, at public demonstrations, and at conferences around the world.

Rachel has a list of honours and awards that is far too long to name here. She has been acknowledged as an Emerging Leader by The Clean50 Summit in Toronto, named one of Toronto’s Environmental Heroes by Now Magazine, nominated as Our Women of the Year in ELLE Magazine, recognized as one of the Seven Kids Saving the Planet Right Now by ELuxe Magazine, included in Canada’s Top 20 Under 20 Change Makers by Post City Magazine, featured in the Top 30 Thinkers Under 30 by Pacific Standard, included as one of Post City Toronto’s Most Inspiring Women, nominated as a finalist in Canada 150’s Lieutenant Governor’s Visionaries Prize. Rachel was also the recipient of the John Filion Award for Community Involvement, the Lieutenant Governor’s Community Volunteer Award, and the Rob Stewart Youth Eco Hero Award. 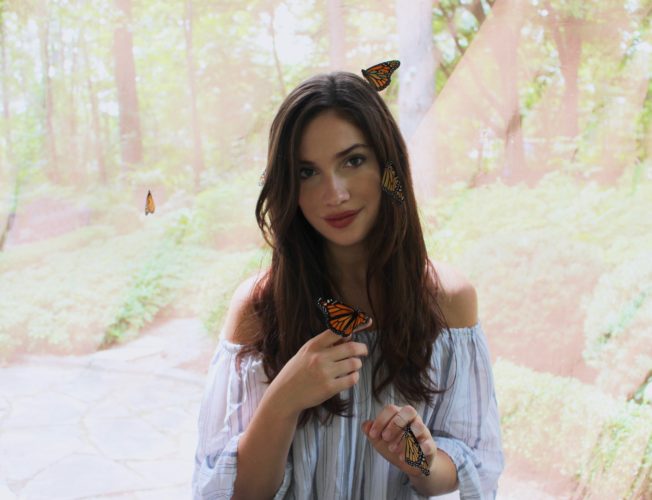 What’s Making Our Children Sick: How Industrial Food Is Causing an Epidemic of Chronic Illness, and What Parents (and Doctors) Can Do About It by Michelle Perro, MD and Vincane Adamas, PhD

Whitewash: The Story of a Weed Killer, Cancer and the Corruption of Science by Carey Gillam

Modified: GMOs and the Threat to Our Food, Our Land, Our Future by Caitlin Shetterly 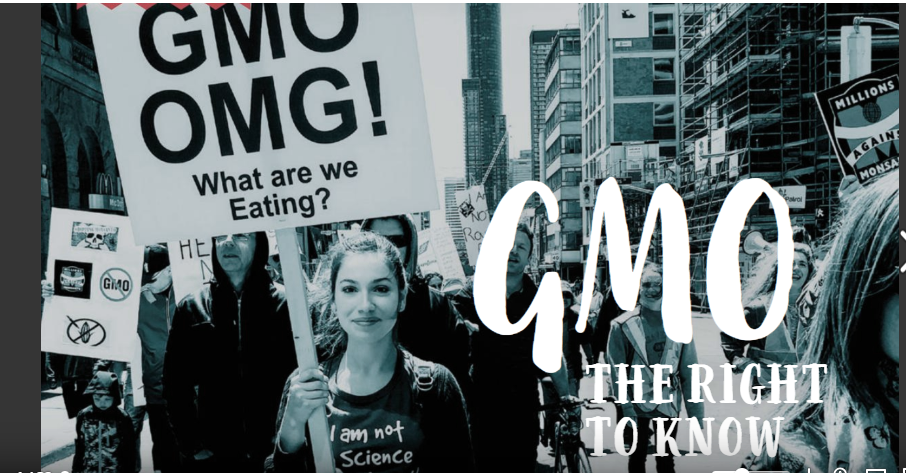 If you would like to learn more about Rachel Parent, KIDS RIGHT TO KNOW, Gen-Earth, & Monarch Butterfly Conservation:

Who Has Your Vote?

Where the federal candidates stand on mandatory labelling of #GMOs ?

Kid Kills it at March Against Monsanto

Rachel Parent speaks out at March Against Monsanto Toronto 2015

Kevin O'Leary vs Rachel Parent "We ARE the lab rats"

Rachel Parent: Wake Up, Rise Up, Stand Up!

Rachel Parent leads protest to Stomp out Monsanto and GMOs

Captain Paul Watson and I chat about activism, his new documentary, and the importance of oceans!

My Interview with Dr. Vandana Shiva and Sue Chiblow!!

The Man Who Beat Monsanto!!!

My Interview with Nnimmo Bassey! MUST WATCH Wisdom For All!

The Dr. Theresa Nicassio Show is Sponsored by:

Allison Carmen – THE GIFT OF MAYBE

PODCASTS of Past Shows

WHAT'S WITH WHEAT? with Cyndi O'Meara on The Dr. Theresa Nicassio Radio Show

WHY IS SALT SO BAD FOR YOU? Dr. Saul Pilar MD Shares The Truth about Salt & Health

How Glyphosate Destroys Your Gut with Dr. Stephanie Seneff January 9, 2020

NEVER, EVER GIVE UP! - MONICA GARTNER SHARES HER INSPIRING STORY Living with Osteogenesis Imperfecta

FART FACTS: What Are Your Farts Telling You? with Dr David Miller ND on The Dr Theresa Nicassio Show

RETHINKING YOUR OWN BRAND OF SEXY with Dr. Susan Edelman on The Dr. Theresa Nicassio Show

ARE YOU SITTING TOO MUCH? SITTING DISEASE on The Dr. Theresa Nicassio Show

RETHINKING OBSTACLES - Stories of Courage on The Dr. Theresa Nicassio Show
«
Prev
1
/
2
Next
»

May 15, 2017:Layne Lieberman RD – BEYOND THE MEDITERRANEAN DIET (LISTEN NOW)

A Registered Psychologist in Vancouver, Canada, Dr. Theresa Nicassio is an integrative health and wellness educator who is fiercely committed to advocating for empowerment, inclusivity, and kindness in all its forms.

Passionate about making the world a better place, Theresa contributes to social, emotional, and environmental transformation using her professional knowledge and personal experiences for the betterment of society and the planet.

“If self-reliance and radical kindness are subversive… count me in!”

Opportunities to Advertise or Sponsor are Now Available

The Dr. Theresa Nicassio Show on HealthyLife.net has an average monthly global audience of over 351,000 listeners per month, not including on-demand listening, podcast downloads or YouTube Channel. There are currently segment sponsorship and advertiser opportunities available to feature your products and services on the program.

A National Association of Broadcasters member, HealthyLife.net is syndicated/simulcast 24/7 to 1.5 million people per month in 135 countries on over 65 distribution channels. It is heard on the internet, In-Cars, on Smartphones, Smart Watches, SmartTV, Tables, on WiFi and on private radio networks for the blind, in retail stores, worship stations and more.

The show is designed to be the wind beneath the wings of creative and courageous visionaries who are doing all they can to make a difference. These carefully selected thought-leaders are invited to share their knowledge and experiences to educate, ignite, and equip the millions of show listeners with tools to transcend the trance of complacency and self-doubt so that we can all enjoy greater vitality and the joy of joining in community to make the world a better place for everyone.